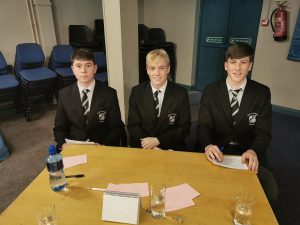 Last Tuesday evening, the senior debating team together with their Irish teachers Ms. Dooley, Mrs. Cody and the Deputy Principal Mrs. Smyth travelled to Na Piarsaigh CLG for Babhta 2 of the Gael Linn Debating Competition. Our team of three senior students were debating “i gcoinne” the motion of – “The Irish people are serious about tackling climate change”. We debated against two Clare teams from Lisdoonvarna and Kilrush. Eoghan Matthews opened our argument, followed by Cian Quinn and Manus Heenan. The boys were commended by the “moltóirí” on their “cur i láthair and bréagnú”. Two of the team members Cian and Manus, were on last year’s team that reached the All-Ireland semi-final. Congratulations to the team who have now qualified for the next round which will take place early in the New Year.