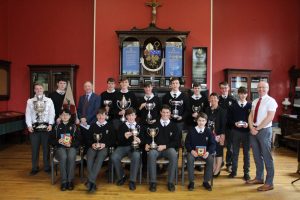 On Tuesday last May 1st the College hosted the Annual Academic Awards, the entire school community attended the awards. This annual event recognises the academic achievement and the classroom and study hall commitment of the student body.

Awards were presented to:

Special awards were given to the following International Students to recognise their achievement in English and their positive contribution to the College: