Our CCR Athletics team represented the College in the All-Ireland Schools Track and Field Championships in Tullamore on Saturday June 1st 2019.

Our Senior Relay team ran the races of their lives to win an All-Ireland Silver Medal in the 4x100m Relay. Diarmuid Kilgallen, Darragh Loughnane, Ben Murphy and Lucas Culliton ran a dream race. CCR pushed Mounthawk Tralee to a neck and neck finish. A race won in a fast time of 43.21. PBC Cork were third while Leinster champions Castleknock were beaten into fourth. The boys have ran together since 1st year and what a day to win their first All-Ireland medal. Well done boys, well deserved and we are all proud of your achievements. 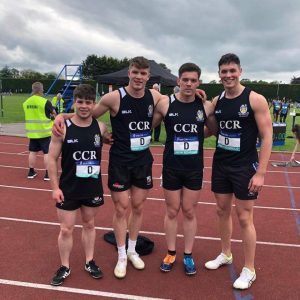 Sean Frawley made it a good afternoon session when he smashed his PB to throw over 13.50 and capture an All Ireland bronze in the Shot Put. Sean also has the Tailtean Games to look forward to in 3 weeks. Sean was equally proud to see his sister, Laura, win gold in the Long Jump. A great day for the Frawley family. Sean was very unlucky in the Hammer when he had the longest throw in the competition but was called for a technical foul. Max Flynn (Junior) also had the longest throw in his Hammer competition but unfortunately also fouled. A very tough lesson for the boys but comfort in knowing that the talent is there. 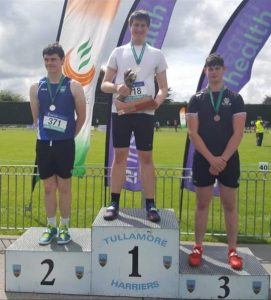 Greg Fitzgerald finished 5th in his Junior High Jump. Greg jumped a PB of 1.65m. A fantastic achievement for the event newcomer. Greg is delighted with his performance and already looking forward to next years competition.

Well done to all athletes for putting in the hard hours. We encourage any student who is interested in Athletics to join our CCR Athletics programme in the 2019-20 school year.

Cistercian College
Open Day 2020 – “Day in the life of a Boarder Experience 2020”Read more
+
We use cookies to ensure that we give you the best experience on our website. If you continue to use this site we will assume that you are happy with it.OkNoCookies Policy