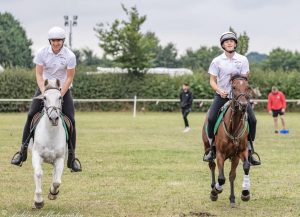 Congratulations to our 5th year student Caleb Schofield (left in photo) and his Mounted Games pair Darragh who competed in the World Pairs Competition. They  qualified after four difficult sessions for the A Final (top 8 in the World). The final proved to be a very challenging competition. Caleb and his pair were in third position after three races, fifth after seven races and with all to play for the top position, when their competition ended abruptly. Caleb missed his vault in a race and was trampled by his pair’s pony. He was rushed to the Emergency Department and thankfully he had no broken bones, just soft tissue damage. However, this was the end of their competition and while they missed the last three races they still managed to finish 7th overall in the U18’s World Mounted Games Pairs Competition.
Congratulations to Caleb and to his family – we are all very proud of this phenomenal achievement. Caleb and his pairs’ partner Darragh represented their country with pride and gave 100% to the competition. We wish them both every success in all their future sports’ events.