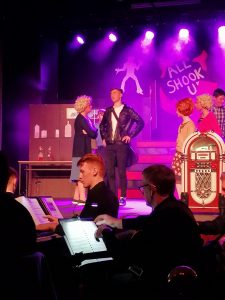 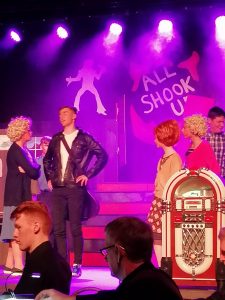 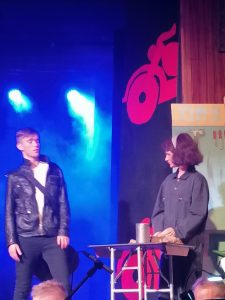 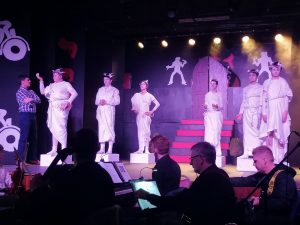 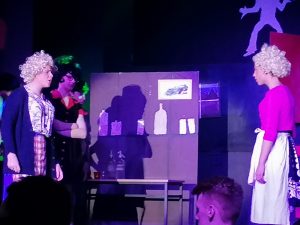 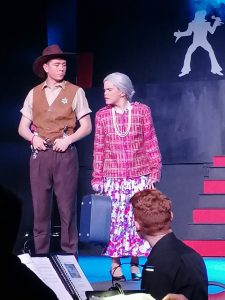 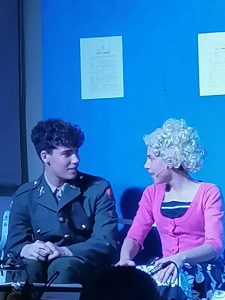 A huge congratulations to all the cast and crew involved with this year’s production of ‘All Shook Up!’ High praise indeed to all the cast and chorus but a special mention must be made for our 5th year students: Chad (played by 5th year Darragh Conroy) is a demanding and intense role. Darragh did an amazing job bringing comedy and an abundance of talent to the character. Supported by Oscar Gilligan as Jim and Eoghan Matthews as Sherrif Earl, we salute our three 5th years for their help and guidance (especially with the younger and less experienced cast members) and commend them on their spectacular performances over the years. We would also like to thank and congratulate our TY students, Cuan Culliton put in an astounding amount of work this year preparing for the coveted role of Dennis. Many people commented on his stage presence and musical talents. David Mulrooney went above and beyond to help in any capacity he could think of – all the while playing the tricky role of Ed (the alter ego of Natalie, ironically taken on by David’s younger brother Conor!). Caleb Faughnan was also outstanding as a chief chorus member. When he wasn’t painting and designing the set, Caleb was stuck in his script learning all his harmony lines!

We are so proud of our junior cast members. Before All Shook Up began, our second years had only three musicals under their belt between all five of them! The effort they put in since September and their willingness to learn and develop their talents has been truly inspiring. Well done to David Purcell (barkeep Sylvia), Virgile de Maepeou (sweet and innocent Lorraine), Adam Stanley (museum curator Miss Sandra), Charlie Whelehan (hilarious bigot Mayor Matilda) and our dance captain/lead statue/chief barfly Mac Dara Fitzpatrick. Huge congratulations to our Natalie as well. Conor Mulrooney was excellent in the role. It’s always a gamble giving a 1st year student the lead role but Conor took it all in his stride – he is one to watch for in the future!

We would also like to commend Kyle Hanamy, 3rd year, on getting involved as one of our main chorus members. Even though he is in an exam year, Kyle was present at rehearsals to support his fellow cast members and was an extremely important and valuable member of our lead cast.

Well done to our crew and production team led by producer Ms Aoife O Neill. Peter Dillon as stage manager did a fabulous job. Peter displayed skills and maturity far beyond his years and was continuously supported and helped by a number of his fellow TYs. They were involved with mics, costumes, make-up, ticket sales, setting scenes, decorating, painting, carpentry and a whole host of other jobs! Well done boys!

As always, the orchestra and cast were led brilliantly by our musical director and head of music, Mr William Cullagh. This was Mr Cullagh’s thirteenth show in CCR and the efforts he continues to make to give the boys musical opportunities is so admirable. Thank you Mr Cullagh.

Our director Kirsty Ryan gave so much to the show this year. It is not easy coming in on dark frosty evenings, night after night, but Kirsty was always there, helping the boys, directing and choreographing every scene, giving them the confidence and belief they needed to play each role. We hope to welcome Kirsty back in the coming years.

Thank you and well done to all involved!