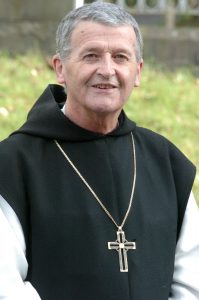 This College community are greatly saddened by the news that Dom. Kevin died earlier this morning.  Dom Kevin came to CCR as a student and he sat his Leaving Cert in 1953. He joined the monastery in 1958. He served as both Dean of Discipline and Games Master. In 1984 he was appointed as College President and he continued in this role until 1997. He was appointed Abbot in 2003, a position that he held during the year of Centenary of the College in 2005.  There are many generations of past students, past parents and past staff that have very fond memories of Dom. Kevin’s time served in CCR. For some of the current staff Dom. Kevin appointed them to their positions.
We offer our sympathy to Dom. Kevin’s family and to the monastic community in the Abbey.
May his soul rest in peace.
news