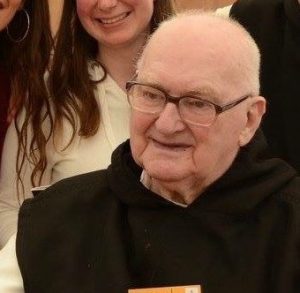 Sadly at the age of ninety-two Father Éanna passed away last Saturday the 10th of March 2018. Today would have been his ninety-third birthday.

When interviewed four years ago Father Éanna Henderson remained as passionate about sport as he was eight decades earlier. ‘Hurling football, tennis, soccer, cycling, swimming, the whole lot. I didn’t excel at any of them but I loved playing games.’ Sport and music were both important parts of his childhood at the Henderson family home in Glasnevin, which was then a small village located on the northern outskirts of Dublin.

There was also rebellion in the blood. A grandmother from Armagh was connected to the Manchester Martyrs, three Irishmen hanged in the wake of a planned Fenian rising in 1867.

Fifty years later, his father, Frank, and Uncle Leo served as officers with the Irish Volunteers. Frank, a printer by trade, was a captain in the GPO garrison during the Easter Rising of 1916 and went on to become Commandant of the Second Battalion of Irish Volunteers.

‘They both had links early on to the Gaelic League and to the GAA, the hurling and football. That’s how so many people met in those times. They had a common link through sport and music and costume and dancing and the Irish language. That’s what bonded them all to Pearse and MacDonagh and Hyde and all of them.’

Father Éanna was in the 73rd year of his Monastic profession. For almost 50 years Father Éanna was involved in Cistercian College. Generations of past students remember him fondly for his push penny leagues. He always looked out for the quieter and shyer lads in CCR and got them involved in Table Tennis, Cards & Draughts. He was a kind and sincere man who took a keen interest in and care of every student.

He loved writing to people particularly those with whom he had connections through music, sport or politics.

It was lovely to see him at the Carol Service just before last Christmas when he still engaged with past students an enquired after many more.

I think it is fair to say that we will never see his likes again.