Our Senior Irish Debating Team sailed through to Round 2 after a well fought debate in the Ursuline on December 6th. They fought off competition from Scoil Chríot Rí Portlaoise and Heywood Community School. The boys were one of two teams to progress to the next round of the competition, the other team being the girls of the Ursuline Secondary School, Thurles. 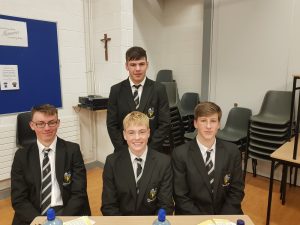 The motion for the evening was ‘Tugaimid aire mhaith dár seanóirí in Éirinn’ – We take good care of our elderly in Ireland. We were against the motion and team captain Jacob Faughnan led us in with some interesting facts on ageism (aoiseachas) and loneliness (uaigneas). Followed by Cian Quinn we were informed of the difficulties our elderly have with new technology (nuatheicneolaíocht) and lack of respect (easpa measa). Closing our teams argument was Manus Heenan who took on the health system (córas sláinte) and nursing homes (tithe altrannais) and the recent scandals. Some amazing rebuttals were put forward by the boys and we look forward to our next round which will take place mid January!

Cistercian College
Open Day 2020 – “Day in the life of a Boarder Experience 2020”Read more
+
We use cookies to ensure that we give you the best experience on our website. If you continue to use this site we will assume that you are happy with it.OkNoCookies Policy