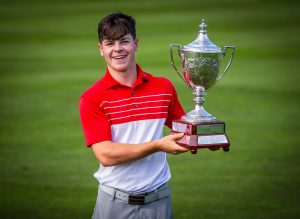 Sam’s year started out on a high note as he was selected to the Irish Boys Under 18 Team for the year. However after being selected to play in the first 3 tournaments (match v Wales, The Peter McEvoy Trophy and The Fairhaven Trophy) for Ireland, they were all promptly cancelled with the onset of the Coronavirus. More cancellations of International events in Germany, Sweden, England, Japan and The Boys Home Internationals in Killarney all followed to add further to the disappointment for all the members of the Irish Team. A very limited schedule of events finally got the green light for August.

The first event was the most prestigious – the Irish Boys Open Championship was played in Thurles. Sam held a 2 shot lead as he faced into the final round. He then played the final round without a bogey, carding 7 birdies to equal the course record of 65 (-7) and win the title in emphatic fashion by 8 shots. Past winners include Damien McGrane, Richie Coughlan, Michael Hoey, Paul Dunne, Mark Power and Rory McIlroy.

Due to the shortened schedule it was decided that The Munster Boys Open Championship would run concurrently with the Irish Boys Championship and the leader after 2 rounds would be declared the Champion. Sam claimed this title also and his name is now engraved on the trophy alongside past greats like Des Smyth and Ronan Rafferty. 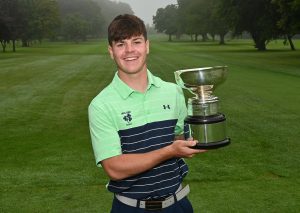 With these victories, Sam rose to 21st in the European Boys rankings and his handicap dropped to +4. Sam’s real prize was the response from the American colleges to Sam’s emphatic win. Over the next couple of months, Sam and his parents deliberated over many scholarship offers from Florida to California! However the lure of the beautiful winter weather in Phoenix, Arizona was too much for Sam to resist. He has now committed to Grand Canyon University and will commence his collegiate golf career next August. It is a wonderful opportunity that is richly deserved for the commitment that Sam has shown to his golf. Now he is looking forward to completing his 6th and final year in CCR with staff and friends.

The following is a link to an interview with Sam

We congratulate Sam on his phenomenal achievements and wish him every success in what looks to be a very promising future for him. Sam’s brother Ben and his Dad Brian are past students of the College.  Congratulations to all Sam’s family – who like us in CCR are all very proud of him. 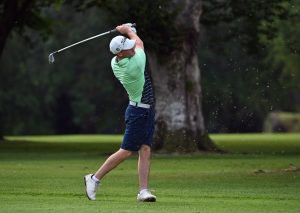