On Thursday 6th December forty-seven students, five teachers and two gap students boarded a 2 a.m. bus for Dublin airport for a five day tour to Austria and Germany. The group flew to the Slovakian capital, Bratislava, which is just an hour away from Vienna and we checked into our hostel. After a quick lunch we met up with our tour guides for a walking tour of Vienna. The guides gave us a very interesting insight into Austrian history, focusing mainly on the ruling Hapsburg dynasty and on the era of the Austro-Hungarian empire. The group was amazed by the impressive architecture. Then it was back to the hostel for dinner and a quiet night in!

Friday morning began with an audio tour of the stunning Schönbrunn Castle outside Vienna. The boys could wander through the rooms at their own pace and see original portraits of Marie- Antoinette, who lived in the castle before marrying King Louis XVI at the age of 15 and also of Empress Sisi, the most famous empress of Austria. There was also time to peruse the little Christmas market in front of the castle, where the boys tasted some of the local delicacies, such as Kinderpunsch (non-alcoholic fruit punch) and Krapfen (large doughnuts).

From there our coach drove us along the Danube to Salzburg. En route we stopped at the beautiful abbey at Melk. The baroque abbey was built between 1702 and 1736 and we got a view of the breath-taking church with magnificent frescoes. It is now also a prestigious co-ed monastery school with more than 700 students.

At around 5 p.m. we arrived at our accommodation in Salzburg and after checking in everybody had free time to explore the city. We met up with a recent past student, Fergal Hayes, who is studying in Linz for the year through the Erasmus programme.

On Saturday morning we woke up to glorious sunshine and everybody had free time around the Salzburg Christmas markets and some went on a Mozart trail. Then we climbed up to the fortress for a view over the city before

Just over the border from Salzburg we stopped at the Berchtesgaden Salt Mines, where the boys put on mining suits and headed into the mines on a train and then into the deepest caverns by sliding down

wooden slides. They were treated to a high-tech virtual tour of the mines as they used to be and a boat ride on an underwater lake. After the mines we continued toward Munich, with just a brief stop to peer up at Kehlsteinhaus (The Eagle’s Nest), Hitler’s alpine residence. Following dinner at the hostel the group went ice skating at Karlsplatz in the centre of Munich.

On Sunday morning the boys attended mass at St. Paul’s church near Marienplatz in Munich and were very impressed with the heated seats as well as the lovely interior. After mass, they had time to look around the Christmas markets before leaving for the indoor water park at Therme Erding, the largest thermal spa in the world with 2,700 metres of slides. This was one of the highlights of the tour for everyone!

Our final day in Munich was spent having a guided tour of the Allianz Arena, where the boys got to see the warm-up areas and dressing room for the Bayern München football team and have a goal-kicking competition for prizes. 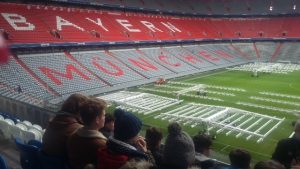 That left just enough time for a bit of retail therapy at the Olympic Stadium shopping centre before heading to the airport for check-in and our flight home to Dublin.

During the tour the boys got to taste authentic German and Austrian food (Currywurst coming out the winner!) and to put their German into practice. It was great to hear familiar phrases such as Danke schön! and Entschuldigung! being uttered on a regular basis and everywhere we went they were complimented on their good behaviour.

Another successful and enjoyable CCR tour and many thanks to all who made it possible.

Manage Cookie Consent
To provide the best experiences, we use technologies like cookies to store and/or access device information. Consenting to these technologies will allow us to process data such as browsing behavior or unique IDs on this site. Not consenting or withdrawing consent, may adversely affect certain features and functions.
Manage options Manage services Manage vendors Read more about these purposes
View preferences
{title} {title} {title}