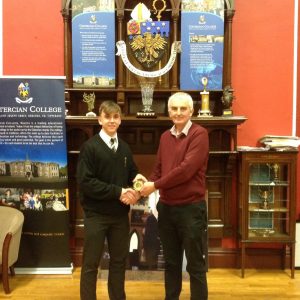 The 2018 Gold Medal Debate took place in The Centenary Room  of the college.

Each speech was of a very high standard, which made adjudication very difficult. However, David McEvoy emerged as the worthy winner speaking in favour of the motion “A leaving certificate result based on continuous assessment and project work would have many benefits and few drawbacks”. David follows in the footsteps of his brother Jimmy who also won this competition. All of the participants must be congratulated for their hard work and efforts which were on going for many weeks.  In addition I would like to thank our adjudicators Flor O’Brien, Catherine Smyth and Niamh O’Rourke.