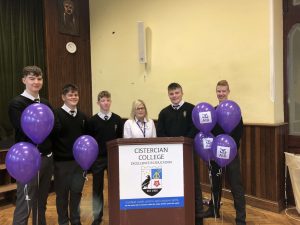 On the 12th of January 2018, the Cistercian College Build a Bank team officially launched our bank with Junior House and Transition Years in attendance. Bank Manager, Shane Connolly, and Director of I.T., Adam Lambkin, both spoke excellently as they explained the team’s ambition for the year. Adam, the director of I.T., urged the boys in attendance to support our social event and Shane informed the boys of the benefits of banking. The boys were then invited to set up an account as well as supporting our fundraisers for Jigsaw. A massive thanks to Ciara Brown and all at the AIB staff in Roscrea for their continued support.
Pictured: Keith Roberts (Human Resources), Shane Connolly (Bank Manager), Adam Lambkin (Director of I.T.), Luke Garry (Sales and Marketing), Jack Gilligan (C.O.O.)