At 1 a.m. on Thursday morning last a group of 24 TY students left the college to catch the 6.15 a.m. flight to Barcelona to begin their 4 day tour. First stop was the city of Barcelona,   where they had time to stroll on Las Ramblas and have lunch. In the afternoon, we were met by our guide for a 3 hour walking tour of the old city which included several Roman archaeological sites, the Gothic cathedral and the Roman walls. 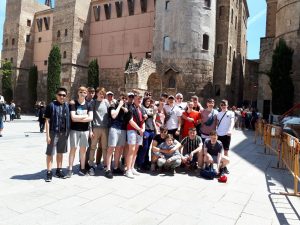 In the evening we travelled to our hotel in Salou and had dinner and an early night after a long day.

Day two we travelled to the famous Monserrat Monastery, set in a spectacular setting on a mountain top north of Barcelona. Some of the boys took the funicular to the top of the mountain and from there they got amazing views of the Catalonian countryside.

In the afternoon we returned to Barcelona for a tour of the Nou Camp Stadium home to Barcelona FC, the museum and stadium tour is an experience for both football and non-football fans alike.

Day three we travelled down the short distance to the Port Aventura Theme Park where the boys spent the day on the various roller coasters and water rides. 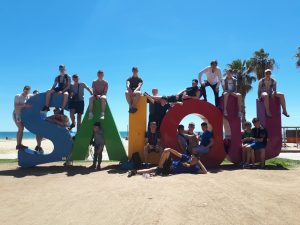