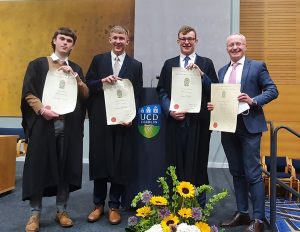 We would like to congratulate Darragh Conroy, James Dunne and Fionn McWey who each received a UCD Entrance Scholars Award earlier this week.

Entrance Scholars are first year students recognised for their academic achievement in achieving 560 points or more in their Leaving Certificate examinations. These awards are part of a range of UCD initiatives recognising exceptional students.

Darragh is studying Science, James is studying Agricultural Science and Fionn is studying Physiotherapy. They were presented with their awards at a ceremony in UCD O’Reilly Hall on Tuesday 5th April. Mr. Grealish attended the ceremony and accepted a commemorative scroll on behalf of the College.