On Wednesday night 27th February 2019 , the Fr. Peter Garvey Memorial Lecture was the latest major event in the school calendar to take place in the Cistercian College Recreation Hall, when the late Abbot of Bolton Abbey and Cistercian College President Fr. Peter was once again commemorated by a moving and impactful guest speaker.

This year Tomi Reichental, a survivor of the Holocaust, was invited as guest speaker. Tomi was captured by the Nazis and sent to the Bergen-Belsen concentration camp in 1944 when he was only 9 years old. He survived along with his mother, brother, aunt and cousin. Thirty five members of his family perished. He has lived in Ireland since 1959. 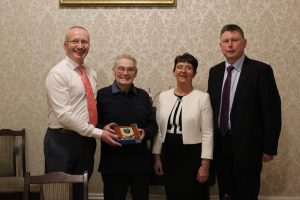 Tomi addressed the packed Cistercian College Recreation Hall for over two hours and all were very moved by his personal journey. His key message was that atrocities like the Nazi Holocaust begin with whispering, bullying and racism. He also said that we must educate our students so as to stop our society from becoming a toxic one and also to educate our youth to not become bystanders in the face of persecution, whatever it’s form.

Many members of the Garvey family attended the lecture along with members of the Mount St Joseph monastic community, past and present staff, Cistercian College students and parents . Thank you to Andrew Cody, past student and member of the Cistercian College Board of Management for making the initial contact with Tomi and to all who contributed to the collection on the night for the Holocaust Education Trust Ireland.